"I don't believe there is anything in the whole earth that you can't learn in Berlin
except the German language." Mark Twain 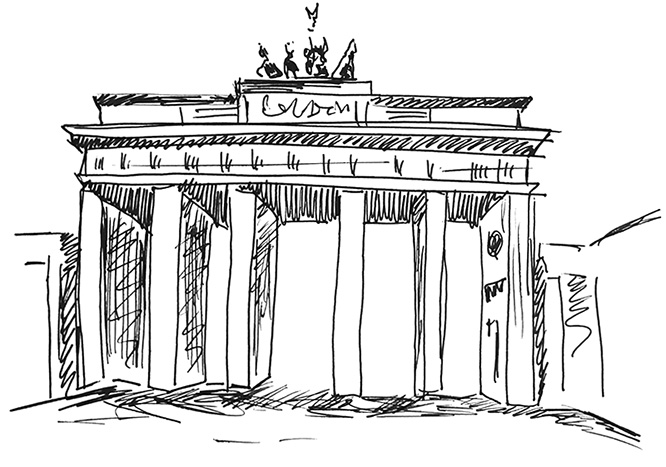 Did you know German allegedly almost became the official language of the US? Rumor has it that during the American Revolution, when the US wanted to cut all ties to England and thus launched a poll concerning the national language, German lost by one single vote.

German is quite the popular language: more than 120 million people in Germany, Austria, Switzerland, Liechtenstein, Luxembourg, parts of Belgium, Northern Italy and Eastern France speak the language. Due to its colonial history, German is even spoken in Namibia.

Furthermore, the German language is highly influential within the European Union and frequently demanded in economically important countries in Eastern and Central Europe. Compared to English, German has eight times as many words. And even though ‚only‘ 12.000-16.000 words build up the active vocabulary, it consists of approximately 5.3 million words.

Germany is home to a number of dialects, which vary from region to region, e.g. Colognian, Saxon and Bavarian. Officially, the standard language, however, is High German. The most popular dictionary of the German language is the Duden. It was first published by Konrad Duden in 1880 and nowadays forms the foundation of the German orthography.

Around the world, German is infamous for being a tough cookie. As an inflectional language, German in contrast to English for example, has a relatively free word order, but inflectional endings that mark the case, gender and number of the words. Apart from its case system, German is also comprised of three different noun markers, which wreck every language learner’s brain.

In most cases, standard German is required for translations into the German language, but also German for Switzerland and Austria. In Switzerland a highly important feature of the language is that the letter ß is always spelled „ss“. In Switzerland, the letter ß became obsolete during the 20th century and it does not appear on the Swiss keyboard. Moreover, there are so called „Helvetisms“, i. e. a specific vocabulary, which was predominantly influenced by the French language: for example a bicycle is called „Velo“ in Switzerland, whereas it is called „Fahrrad“ in Germany. It is essential to note that these Helvetisms do not constitute dialectal expressions, which would be regarded as colloquialisms in the standard language in Switzerland, but accurate expressions of the standard language.

The Austrian German also has a specific thesaurus (so called Austriacisms), phrases and characteristic grammatical, phonetic and spelling features. Popular Austriacicms are for example „Erdapfel“ (potato) instead of Kartoffel, „Marille“ (apricot) instead of Aprikose or „Watsche“ (slap in the face) instead of Ohrfeige.

We offer translations from various languages such as English, French, Spanish or Dutch into German. We do not only work with translators in Cologne, but also have an extensive network of translators in Germany, Switzerland and Austria. Simply state your desired language variant at your commissioning and we will deliver your translation in German for Germany, Switzerland or Austria.